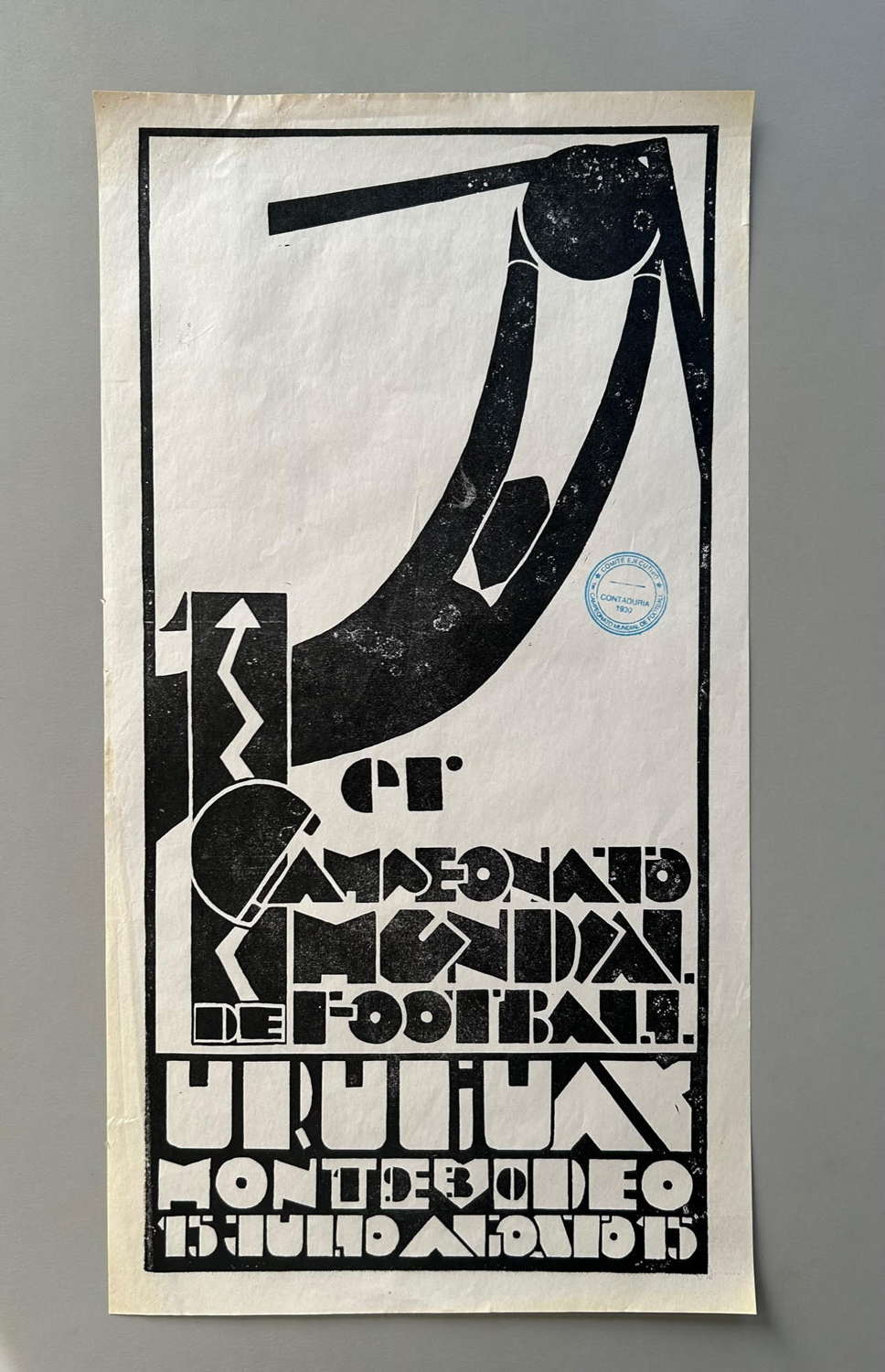 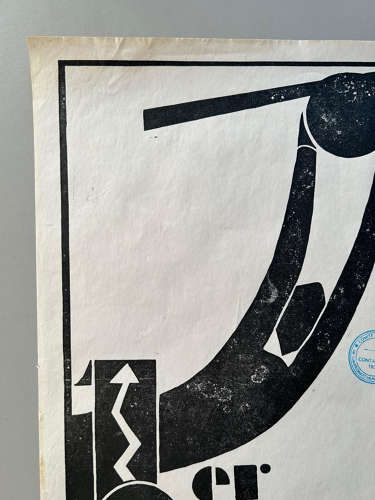 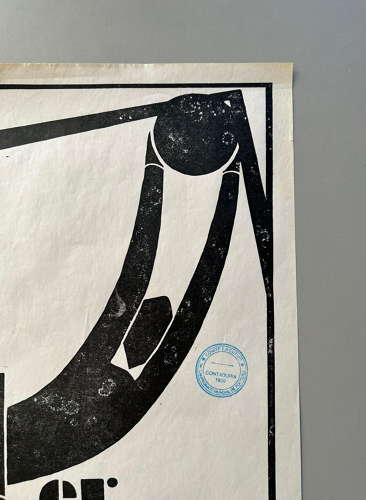 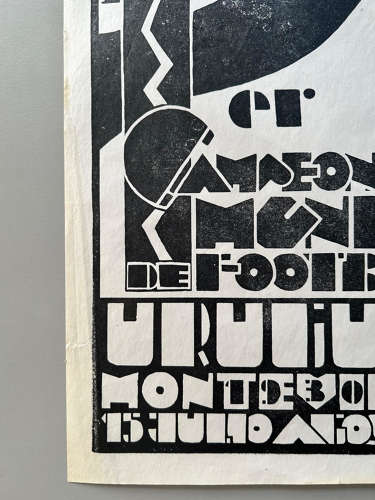 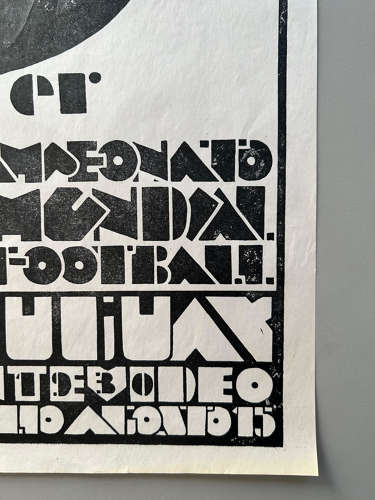 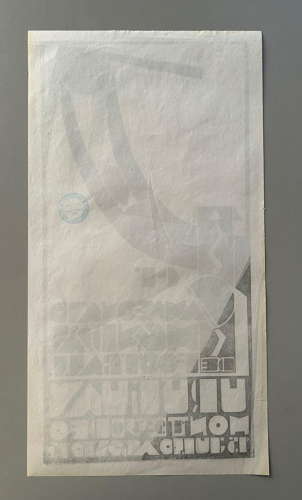 The 1930 FIFA World Cup was the inaugural FIFA World Cup, the world championship award for men’s national association football teams. The tournament was held in Uruguay from 13th to 30th July, 1930.

This monochrome poster reads in Spanish: ‘Soccer World Championship / Montevideo, Uruguay / 15 July – 15 August’. The poster also carries the original blue stamp of the Comite Ejecutivo, marked 1930.The poster created in Art Deco style, depicts in its upper half a stylised figure of a faceless goalkeeper lurching upwards in a valiant attempt to stop a ball aimed at the top right-hand corner of the goal posts from entering the goal area, with the position of the ball shown by placing the crossbar and the right-hand goal post at the back of it in an angular fashion. The lower half contains writing in a heavily stylized font: ‘1er Campeonato Mundial de Futbol’ in black, and ‘Uruguay 1930 Montevideo 15 Julio Augusto 15’. The I is shown enlarged and prominent to emphasise the historical fact that it is the First World Football Championship. The vivid imagery enshrined in this most iconic of sports posters strikingly reflects the creative imagination and the consummate skills of a graphic artist at the height of his career. This iconic and historic poster has come to be known as the ‘Laborde Affiche’. The posters were published by Olivera y Fernandez of Reconquista 624, Montevideo.

Very few of the colour posters are known to have survived, especially as the print run was small. A colour poster in good condition, without losses, tears, nicks or creases or discolourations if it ever appeared in today’s retail market (2019) could fetch a price as high as £50,000. A lot more of the monochrome version were printed for general publicity and advertising purposes and to be distributed to football fans, local and foreign, but mostly from neighbouring Latin American countries. However, only a very few are thought to be in existence today in a good collectible condition, without blemishes like losses, tears or disfiguring and/or deeply marked creases or heavy age-toning as the one we are offering for sale. The one on offer is from a stock purchased from a descendant of the original publisher of the poster, who had looked after his inheritance with the tender loving care that befitted his emotional attachment to it. (Before he agreed to sell his cherished family heirloom, he made extensive enquiries into the credentials of the prospective purchaser. The poster shows that paper, colour and print technologies were still in their early stages of development in 1930 and vastly different from those of the present day. However, for a dedicated and informed collector of sports memorabilia they add special dimensions of interest.

This now very rare almost 93 year-old poster is in good condition for its age and will command a very high price in 2030, the centenary year of the FIFA World Cup when it will have achieved the exalted status of an antiquarian poster.

The 1930 FIFA World Cup was the inaugural FIFA World Cup, the world championship award for men’s national association football teams. The tournament was held in Uruguay from 13th to 30th July, 1930. FIFA, football’s international body governing, selected Uruguay as the host nation, acknowledging the twin-facts that in 1930 the country would be celebrating the centenary of its first constitution, and the Uruguay national football team had successfully retained their football title at the 1928 Olympic Games. All the matches were played in the capital of Uruguay, Montevideo, the majority at the Estadio Centenario, which was specially built for the tournament. Thirteen teams (seven from South America, four from Europe and two from North America) entered the tournament. Only a few Europeans teams chose to take participate because of the difficulty of travelling to South America at the time. The teams were divided into four groups, with the winner of each group progressing to the semi-finals. The first two World Cup matches took place simultaneously, and were won France and the United States, who defeated Mexico 4-1 and Belgium 3-0, respectively. Lucien Laurent of France scored the first goal in World Cup history, while the US goalkeeper, Jimmy Douglas posted the first official ‘clean sheet’ in the tournament. Argentina, Uruguay, the United States and Yugoslavia won their respective groups to qualify for the semi-finals. In the final, the host-nation and pre-tournament favourite, Uruguay defeated Argentina in front of a crowd of 68,346 people, and became the first footballing nation to win the World Cup.

Two types of posters were commissioned by the Uruguayan Football Federation, AUF for the tournament. They were the Official Poster in colour (78.5 x 38 cm; 38 x 15 in) and a smaller monochrome version of the Official Poster with the official stamp of the Comite Ejecutivo (52 x 28 cm; 201/2 by 11 in) designed by the Uruguayan graphic artist, Guillermo Laborde who had by that time acquired an international reputation.

Guillermo Laborde studied at the Circulo Estimulo de Bellad Artes with Carlos Maria Herrerea in Buenos Aires, before travelling to Europe between 1910 and 1912 visiting Florence, Milan, Rome, Paris and Spain. On his return to South America his work was widely exhibited in Uruguay, Argentina, Peru and Ecuador and was the winner of various art awards. In view of his recognition in the Uruguayan art world, Laborde was originally selected as a juror on the panel that was formed to select the winner of the competition to design the official poster for the historic first World Cup of 1930. However, he subsequently decided to resign from the jury as he wished to enter the competition himself. Laborde in fact entered two designs and finished first and third.  In later life he became a teacher at the Circulo Estimulo de Bellad Artes, the Escuela de la Construccion and the Instituto Magisterial. Laborde also forged close links with the theatre, managing stage design at the Casa del Arte.

The colour posters were to be given to the participating teams and officials connected with the staging of the event and dignitaries, both local and foreign, mostly from the neighbouring Latin American countries. Research indicates that there were only two types of the colour posters, both having the same characteristics except some had the printers mark and the others were without this mark.

The Monochrome Version details given previously

Condition : The Poster is in good condition for its age
Materials : Paper
Origin : Uruguay
Publication Date : 1930