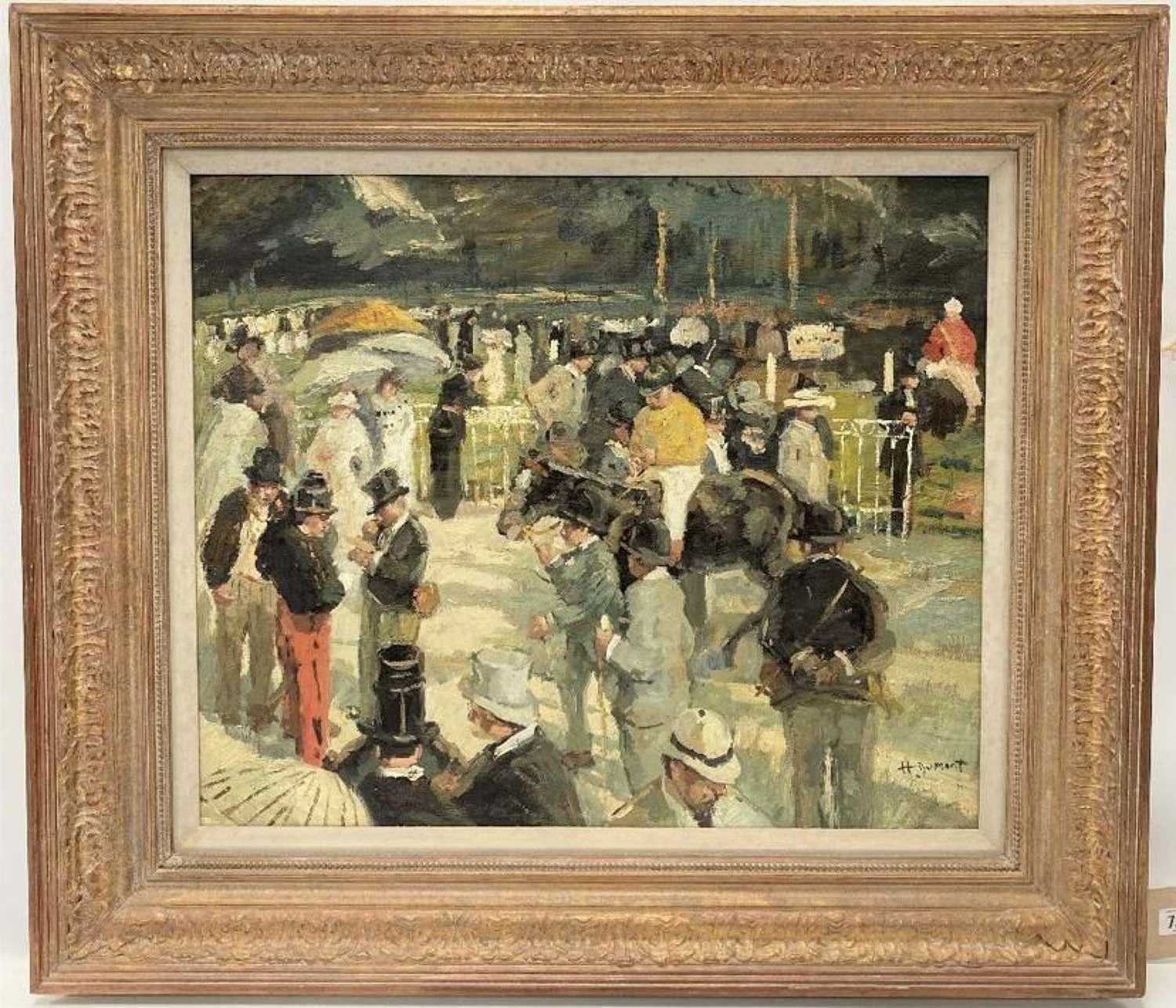 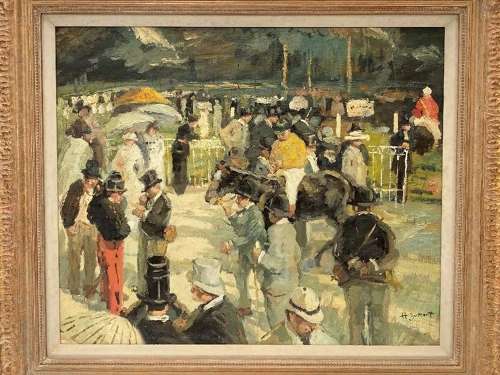 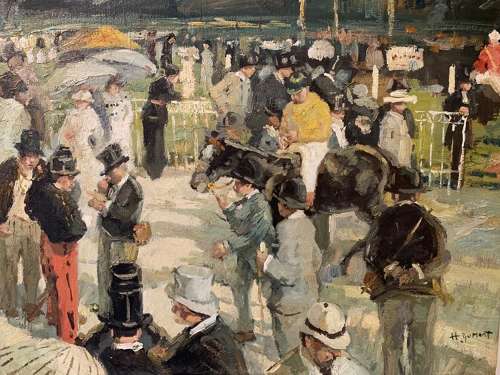 Circle of Julien Dumont - Oil on Board - 'Longchamp Races, Paris'

Circle of Julien Dumont 1859-1921, Oil on Board of 'Longchamp Races, Paris', a wonderful impressionistic painting. Signed

Henri-Julien Dumont (more commonly known in America as Henri Dumont) was a French painter, poster artist, lithographer, engraver and writer most known for his flower painting. Dumont was born on December 14, 1856 in Beauvais-sur-Oise, France to Alfred Dumont %26 Julie-Louise No. Dumont began his artistic training at about age sixteen or seventeen under artist Jules Frederic Ballavoine (1855-1901) at the Académie des Beaux-Arts, but was called for military service from 1876-1877. After leaving the service, he continued to study painting under Ballavoine at the Beaux-Arts.

From 1881-1883 Dumont exhibited at the Paris Salon. Showing at the Salon would be short-lived. Dumont’s radical ideas formulated with his society friends gave birth to the 1884 Salon des Independants exhibition (the Impressionist show), an alternative to the Paris Salon.

In 1883, Dumont set up a painting studio at 11 Boulevard de Clichy and becomes a member of the Societe National des Beaux-art. By 1884, he is listed as a flower painter, but does not begin almost exclusively painting flowers until 1897-1900. Dumont signs his flower paintings "Henri Dumont" rather than his full given name.

Artist model, Hélène André (also known as Ellen Andrée) who modeled for Edgar Degas between 1875 and 79 meets Dumont. The two begin dating and living together from around 1887 at 75 Boulevard de Clichy. Ellen, who suffers a public scandal for modeling in the nude for male painters like Edgar Degas and Claude Manet would live unwed with Dumont until their marriage in 1921. In the 1879, Ellen studies acting under Alexandre Joseph Landrol (1828-1888) at the Threatre Gymnase, Paris. She gives up modeling in the early 1880s and takes up acting full time. In 1887 she joins the theater group of Andre Antonie (1858-1943). She continued working in mainstream theater through the 1920s.

In 1890 Dumont exhibits with his friends at the Salon des Independants. But, painting was not the artist’s only passion. Three years later in 1893, the artist illustrates two Art Nouveau posters printed by American Posters, Paris. The pieces became iconic examples of the art from the era as displayed by the Museum of Modern Art (MOMA), New York, NY in 1960 and 1968. Expressing his full range, Dumont executes a decorative panel commission in 1895 and in 1908 original designs for tapestry. During this creative period, Dumont becomes a member of the National Society of Fine Arts. He and Ellen socialize with many prominent actors of the day and Dumont paints portraits of the thespians signing the canvas "Henry."

In 1905, Dumont is part of a delegation of French artists who show at the Chicago Institute of Art, Chicago, IL.

Awards won by Dumont include: a bronze medal at the Universal Exhibition (1900), a medal at the International Exhibition, Ghent (1914) and he was named Chevalier of the Legion of Honor sponsored by painter Lucien-Victor Guirand de Scevola.

Dumont’s work is in the Musee des Charmettes, France.

Many sources list Dumont’s death date as 1921, but the artist lived until 1933. His wife’s death date is also incorrect in most listings, she died in 1933, too. The couple was buried in a common grave in Montmartre Cemetery. There last known address was 71 Boulevard de Clichy in 1930.