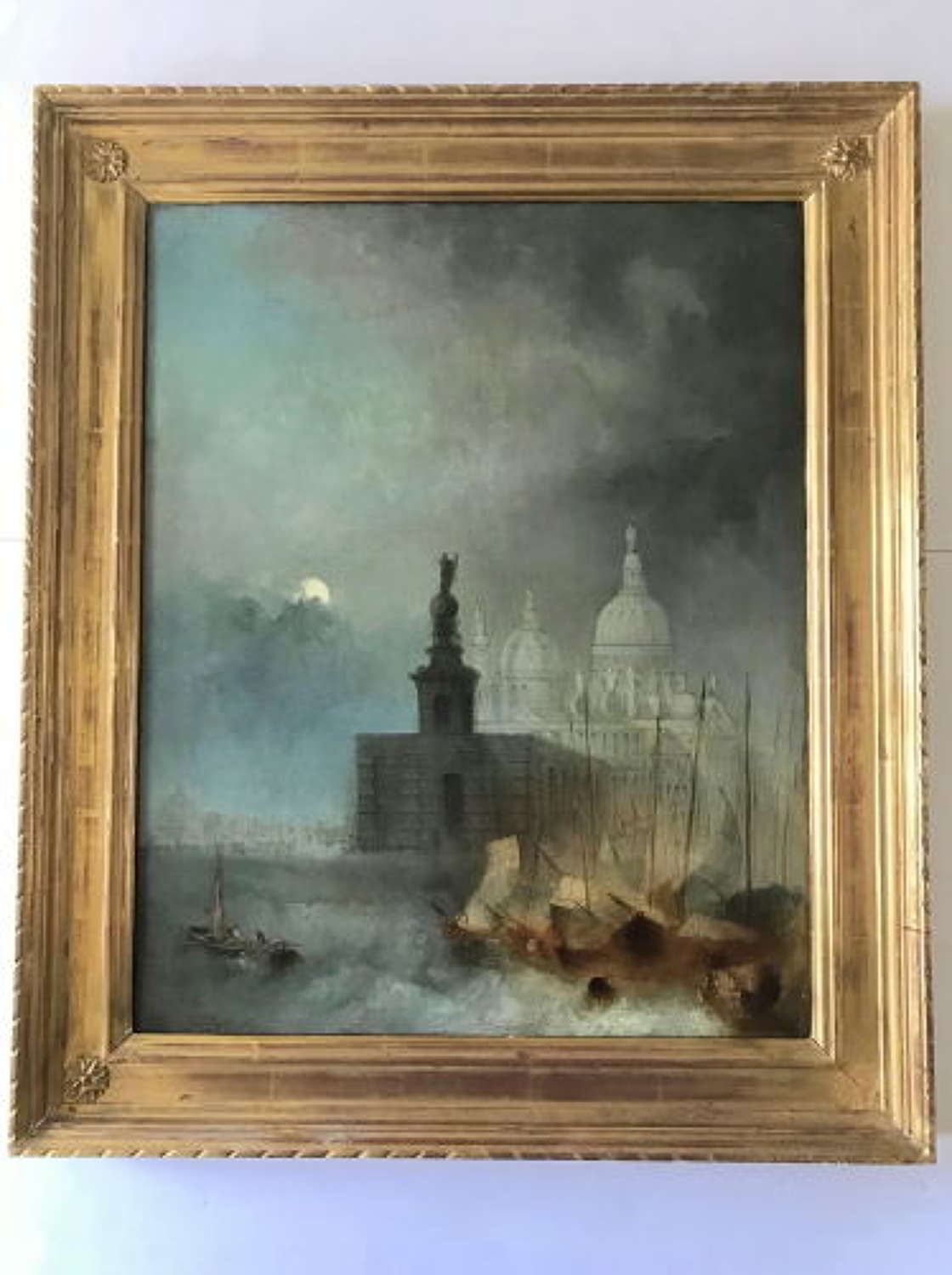 Circle of Clarkson Stanfield, View of Santa Maria Della Salute, Venice, with the Giudecca beyond, oil on canvas. Circle of: (in our opinion a work by a hand closely associated with the named artist that could be his pupil). Relined and cleaned

Clarkson Stanfield, RA (1793-1867) was born at Sunderland, the son of James Stanfield (1749–1824) an Irish-born author, actor and former seaman. Clarkson was named after Thomas Clarkson, the slave trade Abolotionist, whom his father knew, and this was the only forename he used, although there is reason to believe Frederick was a second one. Stanfield probably inherited artistic talent from his mother, who is said to have been an artist but died in 1801. He was briefly apprenticed to a coach decorator in 1806, but left owing to the drunkenness of his master's wife and joined a Soth Shields collier to become a sailor. In 1808 he was Pressed into the Royal Navy,Discharged on health grounds in 1814, he then made a voyage to China in 1815 on the East Indianman Warley and returned with many sketches.

During the 1820s, Stanfield developed as an exhibiting artist, while consolidating his position as the leading scene painter of the period. He showed landscapes and seascapes in oil and watercolour at major venues, including the Royal Academy, the British Institution, and the Society of British Artists (which he helped to found in 1824). His election as an associate member of the Royal Academy (1832) and then as a full academician (1835) helped confirm his reputation, and he gave up theatrical work to concentrate on painting, and also to illustrate. He augmented his views of British coasts by making regular visits to the Continent, especially to Venice (in the 1830s) and Holland (in the 1840s). In 1855, he won a First Class Medal at the Exposition Universelle, Paris. John Ruskin praised his skilful and accurate depiction of sea and sky, and the public generally preferred his degree of finish to the loose and suggestive manner of J M W Turner’s later years.

Stanfield moved in literary circles, and the large house in Hampstead, which was his home from 1847, became a meeting place for writers as well as artists. He developed a particularly close friendship with Charles Dickens, taking part in his private theatricals, both as actor and designer, contributing illustrations to some of his books, and accompanying him on travels. On his death, in Hampstead on 18 May 1867, a letter from Dickens was found beneath his pillow.